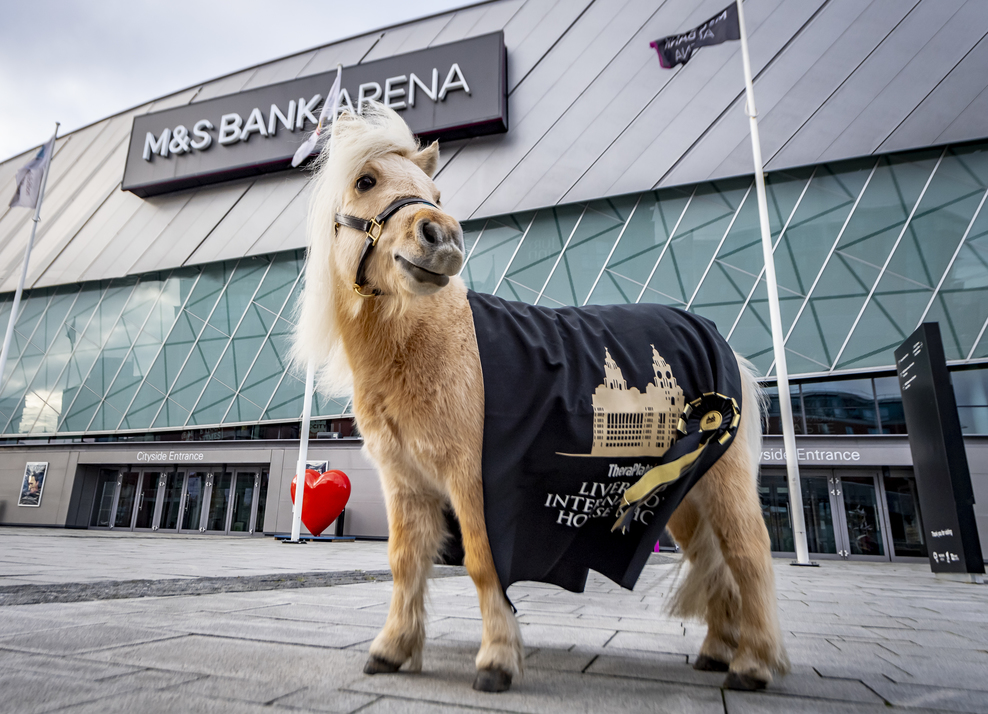 TEDDY the Shetland, the palomino pint-sized internet sensation has been out and about this week getting a sneak preview of the TheraPlate UK Liverpool International Horse Show with the event just weeks away!

Visiting the city, this little ball of fun with a giant personality was in his element as he visited the iconic M&S Bank Arena and toured the city with well-known racing commentator and former jockey Emma Spencer who couldn’t resist giving him a few cuddles along the way.

Emma has a busy career and is also a huge supporter of her daughters competing on the show jumping circuit.

Teddy’s tour was to mark him making a special appearance at the show on New Year’s Eve as part of ‘An Audience With’ Teddy the Shetland & This Esme at 4pm on Tuesday, December 31.

He is one of the most famous ponies on the internet and this once in a lifetime opportunity will delight fans as they find out more about this super-special pony during the 40 minute meet and greet in the Arena Theatre.

He has model looks, he’s in demand from major brands, he does appearances at children’s parties, and he has amassed a huge following on social media, he is simply a star!

During his trip to Liverpool, Teddy the Shetland visited the Liverpool Big Wheel, the Albert Docks, Horse Monument and Beatles Story Exhibition.

If that wasn’t enough for his little legs, he also took a trip on a Liverpool bus, caught a glimpse of the Mersey and last but not least even took in some puissance practice.

Did his bid to secure the ‘Shetland Puissance World Record’ come up trumps – find out more from him at the show!

‘An Audience With’… Teddy the Shetland & This Esme as well as many other exciting upgrades are available at the checkout when purchasing tickets online. This Esme is also doing ‘An Audience With’ session on Saturday 28th December at 11am.

This year’s TheraPlate UK Liverpool International Horse Show will see a host of leading names in action from December 28 to 31.

Family tickets start from £16pp (plus fees). To book tickets and for further information visit www.liverpoolhorseshow.com