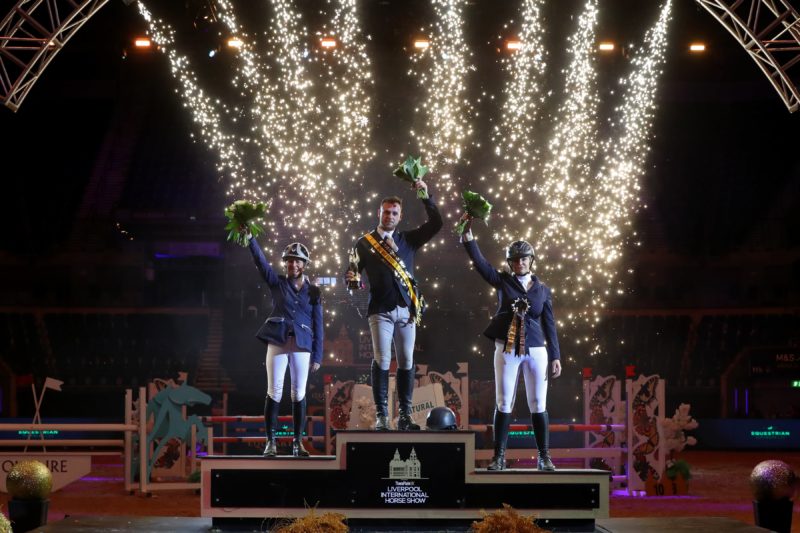 Leicestershire rider Joss Williams reduced his owner to tears as he claimed an impressive victory at the TheraPlate UK Liverpool International Horse Show.

Joss took the Equestrian Surfaces amateur 1.15m jump-off class with 17-year-old Zandokan Z after 15 combinations made it through to a race against the clock.

And it proved a thrilling experience for the horse’s owner Jan Coomer, who travelled from her Guernsey base to enjoy New Year in Liverpool and watch her pride and joy compete.

“I have had him for two years, and have a good owner Jan Coomer, who lives in Guernsey, and he really is her pride and joy. She is in tears, jumping up and down,” Joss said.

“She has come from Guernsey to spend the New Year here, so it’s lovely.”

Ireland’s Carol Gee had set the pace on Fernhill Splash, clocking 29.72 seconds, so Joss knew he had it all to do.

“It’s a magic win,” Joss added. “He is an older horse now, and he was the only one I had here this week.

“He’s quite spooky, so it took the first two days for him to get used to things, and today he felt really good.

“There were a lot of quick combinations in the class, and maybe the run down to fence number two, I just let him gallop and kept travelling, which I think helped in terms of our jump-off time.”