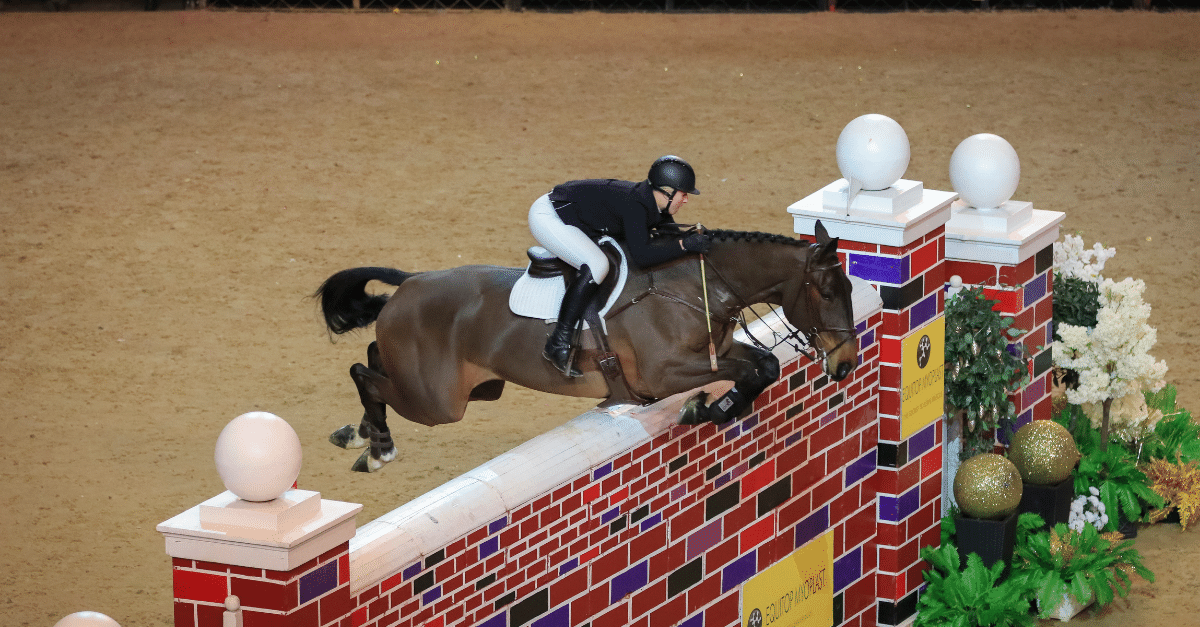 The puissance is described by Google as, “a competitive test of a horse’s ability to jump large obstacles in showjumping.” This vague statement gives non-equestrians little understanding, and even to knowledgeable equestrians, it leaves a lot of the rules and understanding to the imagination.

With puissance events being held all over the country it would be helpful to fully understand how it works and why it is such a prestigious event in the showjumping calendar.

When did the puissance wall start?

The term “puissance” originates from the Anglo-French word for power, and it has stuck ever since. It is actually unknown the 100% factual source of the puissance wall, but it is told that it was first started during the 1900 Olympics in Paris. It was used to show the ability of the horses and essentially was a “horse high jump”.

Originally it was actually hedgerow that had timber rails added to the top at the start of each round. Since then, it has evolved and horse safety has of course become paramount for the event.

The traditional “wall” that you and I are familiar with was actually slowly introduced over the late 1900’s and started in London during the London International Horse Show (otherwise known as Olympia) during the 1980’s. It now uses very light blocks that require the horses to clear with clearance and all blocks to remain on the wall in order to progress through to the next round.

What are the rules?

Fundamentally, the rules aren’t any different to a standard showjumping competition. Keep the fences up and you can’t cross your tracks/circle. That said there are a few different things with the puissance wall. There are a maximum of five rounds-the first round followed by four jump-offs in effect. In the first round there is usually an oxer (round 1.30/1.40 depending on the level), then a triple bar (again around 1.40), then finally the horse and rider combination come round to the red brick wall to clear it.

Every fence counts so if the rider has either the oxer or the triple bar (or of course the wall) down then they are out of the competition. After the first round, the oxer is removed and the riders only jump the triple bar and the wall, again both are included in the round.

The starting heights can vary and for the subsequent jump-offs, the jumps are raised for each round. The winner is of course the horse and rider who jumps that famous brick wall at the greatest height. In the event of equality after the fifth round, riders share first prize and sometimes riders choose to bow out gracefully whilst they are equal first and share top spot with their rivals.

First prize varies from show to show but generally, the prize money is very good for this class and is why many showjumpers have specialist horses to jump the puissance on. These are really the only rules involved, there is no time allowed or fastest rounds, just simply who can jump the highest. It is a similar conceptto “chase me Charlie” that is used in pony clubs and rider clubs across the country that is a single fence that is raised every round until there is only one horse left in the competition.

Where can I see the puissance?

The puissance is an ever more popular class with more and more show centres starting to include it. That said, many do not have the facilities to host the “wall”, nor do they have the calibre of riders that wish to jump the puissance wall. Events such as Dodson & Horrell Bolesworth International and the Voltaire Design Liverpool International Horse Show are great events to come along and see these incredible animals clearing the wall. These events don’t only attract the top riders, but also have a fantastic atmosphere to enjoy the show!

You can buy tickets to this year’s Voltaire Design Liverpool International Horse Show by clicking here.